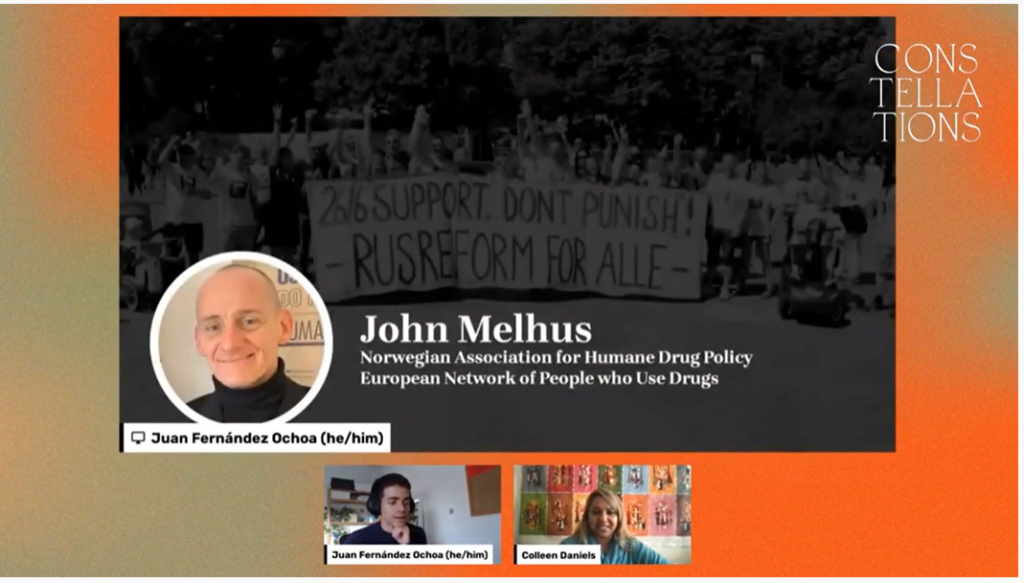 Over the past 18 months, the “Harm Reduction Consortium” has been developing the world’s first ‘composite index’ that scores and ranks national drug policies and their implementation. Examining five different dimensions (extreme responses, proportionality, harm reduction, access to controlled medicines, and development) – initially for 30 countries around the world – the Index can be a valuable resource to support your work. In this session, join the Consortium and some of our national partners to learn about the first Index results, what they tell us, and what comes next.

This is the speech from John Melhus, Norwegian Association for Humane Drug Policy/European Network of People Using Drugs at a meeting about the Drug Policy Index 17. november 2021. Unfortunately John couldn't participate at the meeting, so his speech was read by Juan Fernández Ochoa, IDPC:

Thank you for the opportunity to speak here!

Many of us here in Norway are really excited about the Global Drug Policy Index. At last a tool which helps measure progress in drug policy.

Being the EuroNPUD Norwegian coordinator for the GDPI I was especially interested to see the results and the scores of Norway on the Index.

Drug Policy has been a hot issue the past years in Norway. We were this close to having a general decriminalisation of drug use.

Although the debate has been raging for many years, the breakthrough came after a petition we made back in 2015, where we demanded to be invited to join the official Norwegian delegation to the UN and recommended decriminalisation..89 people from different professions, like lawyers, doctors, academics signed this petition After this petition was published we were invited to a dialogue meeting with the ministry of Health.

This petition had somehow inspired the minister of health to seek information. He had till then been a hardliner - against any change in Law.

In 2017 he changed his mind and after that it became government policy: to shift the responsibility of drug use from justice to the health sector.

There were hearings and debates and a working group presented a roadmap of implementation of decriminalisation.

This was followed by an extremely heated and polarized public discourse on drug policy the past two years.The general election this year, was won by the labour party, which had decided to be against decriminalisation.

SO...After this polarized climate, where the opponents were claiming that “Norwegian drug policy is successful” and the proponents claiming it is not, awaiting the result and score of Norway was exciting.

When the GDPI results came out and Norway scored the highest, you can imagine, the initial response was one of surprise! How can this be - we have one of the highest death overdose rates in Europe, the police are really hard handed and have use of drugs as one of their foremost priorities, youth are being put on 6 to 18 months of drug testing regimes to prove they stay drug free, and not speak of the multitude of tragedies that are caused by criminalisation in the country!

But we finally understood that the score was actually nothing for Norway to be proud of. The country, along with the others in the index, actually do not reach the minimum baseline on human rights and health  as laid out in the United Nations Common position of drugs.

Norway has a history of being a UN champion on Human rights and against death penalties, but in the field of drug policy there seems to be a flaw.

On Justice and proportionality Norway scored a meager 48. This is what decriminalisation and the reform would have addressed.

I think that it is here that we can see how the GDPI will be of help in the future. It highlights the areas that need improvement: where we are failing and where we need to adjust our policies.

It may even be a tool, which helps not only policy makers but also the general public understand the issues.

Just yesterday we formally handed over the report to the leader of the Norwegian Parliaments Health Commitee.

"We welcome this report and look forward to using it as a tool, in cooperation with the authorities to improve the policies that have such a negative impact on the lives of so many affected people and their communities. While it is true that Norway obtained the highest score out of the 30 countries assessed, the country is still 26 points beneath the recommended baseline laid down in the UN System Common Position on drugs. When it comes to human rights, health and development, there can be no room for complacency."

We really look forward to cooperating with partners in Civil Society and the authorities in order to improve this score both here in Norway and globally! This way we can adjust drug policy outcomes to improve the health and wellbeing for all - this time also including the lives of people who use drugs!